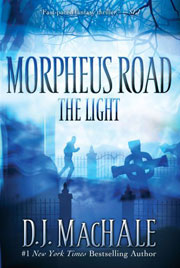 Marshall Seaver is being haunted. In the first installment of this chillingly compelling trilogy, sixteen-year-old Marshall discovers that something beyond our world is after him. The eerie clues pile up quickly, and when people start dying, it’s clear whatever this isit’s huge.

Marshall has no idea what’s happening to him, but he’s soon convinced that it has something to do with his best friend Cooper, who’s been missing for over a week. Together with Coop’s sister, Marsh searches for the truth about what happened to his friend, ultimately uncovering something bigger than he could ever have imagined.

Simple as that. I believe in ghosts.

Maybe that doesnâ€™t come across as very dramatic. After all, lots of people believe in ghosts. You always hear stories about some guy who felt a â€œpresenceâ€ or glimpsed a fleeting, unexplainable phenomenon. There are mediums who claim they can make contact with the great beyond and receive messages to let the living know that all is well. Or not. Then there are those people who operate on a more philosophical level . . . the spiritual types who believe that the energy of the human soul is so powerful, it must continue on after death to some other plane of existence. Of course, there are millions of people who love getting scared by ghost stories. They may not believe, but they sure have fun pretending.

Iâ€™m not like any of those people. At least not anymore. A little over a week ago you could have put me in the category of somebody who didnâ€™t necessarily believe in anything supernatural, though I did like horror movies. But that was then. Before last week. A week is like . . . nothing. How many particular weeks can anybody really remember? A week can fly by like any other. Or it can change your life. You tend to remember those weeks.

It was the week the haunting began.Or maybe I should call it the hunting because thatâ€™s what it was. I was being hunted. And haunted. It wasnâ€™t a good week.

My name is Marshall Seaver. People call me Marsh. I live in a small town in Connecticut called Stony Brook. Itâ€™s a suburb of New York City where moms drive oversize silver trucks to Starbucks and most kids play soccer whether they want to or not. Itâ€™s the kind of place where kids are trained from birth to compete. In everything. School, sports, friendships, clothes . . . you know, everything. Iâ€™m not sure what the point is other than to win bragging rights. Luckily, my parents didnâ€™t buy into that program. They said I should set my own priorities. I liked that. Though it puts pressure on me to figure out what those priorities are.

I guess youâ€™d call us middle class. Weâ€™ve only got one car and itâ€™s almost as old as I am. I canâ€™t believe itâ€™s still running, because we drove it into the ground. My parents liked to travel. That was one of their priorities. Whenever they had two days off, weâ€™d hit the road, headed for some national monument or backwater town that served awesome gumbo or had historical significance or maybe just sounded different. I complained a lot about how boring it was, but to be honest, I didnâ€™t hate it. Bumping around in the back of a car wasnâ€™t great, but the adventure of it all made it worthwhile. Itâ€™s kind of cool to see things for real instead of on TV. I miss those trips.

Other than that, my life is pretty usual. Unlike a lot of people in this town, Iâ€™ve never been inside a country club. Most of my clothes come from Target. I ride my bike to school. We donâ€™t live in a monster-size house, but itâ€™s plenty big enough for the three of us.

That is, when there were still three of us.

Things have changed. Not that long ago I thought I had a pretty good handle on what normal was. I was wrong. Nothing about my life is normal anymore. The events that unfolded over the last week werenâ€™t just about me, either. Many lives were touched and not all for the better. As I look back, I canâ€™t help but wonder what might have happened if different decisions had been made. Different paths taken. So many innocent choices added to a butterfly effect that fed the nightmare. Or created it. I guess it goes without saying that Iâ€™m still alive. Not everyone was so lucky. Thatâ€™s the harsh thing about ghost stories. Somebody has to die. No death, no ghost. I survived the week and that gives me a feeling of guilt Iâ€™ll carry forever. Or at least for as long as I live. I hope thatâ€™s a good long time, but there are no guarantees because this story isnâ€™t done.

The hunt is still on.

My story may sound like a fantasy, and maybe some of it is. But many things happened over that week that canâ€™t be ignored or explained away as having sprung from an overly imaginative mind. People died. Lives were changed. That was no dream. After what I saw and experienced, thereâ€™s one other bit of reality I have to accept.

After you hear my story, I think you will too.