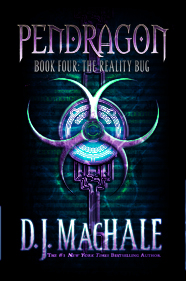 The territory of Veelox has achieved perfect harmony. Fifteen-year-old Bobby Pendragon arrives on this territory in pursuit of the evil Saint Dane, but all is peaceful on Veelox — because it’s deserted. The inhabitants have discovered a way to enter their own personal dream worlds, where they can be whoever they want, wherever they want. Their bodies lie in stasis while their minds escape to this dream realm.

Fresh from his battle with Saint Dane in 1937 Earth, Bobby is confident that they can defeat whatever Saint Dane has planned for this world. But once Bobby enters the virtual world will he be able to resist the lure of the ultimate in escapism?

Bobby Pendragon slipped the heavy ring onto his finger, where it belonged. But no sooner was it back in place when surprisingly, it began to twitch.

The gray stone in the center of the ring began to glow, then sparkle. A second later a sharp beam of light shot from its center. With a flash, the light blossomed into an image that hovered in front of the group.

Mark and Courtney took a surprised step backward. Gunny Van Dyke stepped protectively in front of them. But Bobby held his ground. Of the four of them standing on the empty lot at 2 Linden Place, Second Earth, Bobby was the only one who had seen this particular phenomenon before.

Floating before them was the image of a girl. Actually, it was a girl’s head. Just a head. It was bigger than life, but definitely a girl. She had blond hair pulled back in a ponytail and wore small, yellow-tinted glasses.

“Where have you been?” the floating head demanded angrily. “I’ve been trying to contact you for ages!”

“I don’t want to hear it, Pendragon,” Aja’s head shot back. “You’d better get back to Veelox.”

Aja-head hesitated. She looked nervous. Or at least as nervous as a 3-D floating head could look. “I’m not saying I made a mistake,” she explained with a touch of embarrassment. “This may be a total false alarm, but — ”

“All right!” Aja snapped. “Saint Dane may have slipped through my security system. He is here on Veelox.”

Bobby smiled and asked teasingly, “You’re telling me your perfect security system isn’t all that perfect?”

“Are you coming or not?” Aja demanded. She didn’t like being challenged.

“On my way,” Bobby answered.

“Don’t take your time,” Aja said snottily. Then the image vanished. The beam of light shot back into the ring and all was normal.

“Well,” said Courtney with a sigh. “That was…strange.”

“I guess I’m going to Veelox,” Bobby said. Then looked to Gunny and asked, “Want to come?”

“Wouldn’t miss it,” Gunny answered with a smile.

Bobby turned to face Mark and Courtney. “This has been the best week of my life,” he said sincerely.

The three friends had just spent an excellent week together, forgetting for a short while that Bobby Pendragon was a Traveler who shot across the universe, protecting Halla from an evil demon. Mark was nearly in tears. Courtney wasn’t far behind. She walked up to Bobby and before he realized what was happening, she grabbed him and planted a serious kiss on his lips. Bobby didn’t fight it. Once the shock was over, he wrapped his arms around Courtney and held her close.

Mark and Gunny turned away.

When Courtney and Bobby finally unlocked lips, Bobby’s eyes were a little watery. But Courtney’s gaze was razor sharp.

“Let’s not wait another year before the next one, okay?” she said.

Mark looked at Bobby, his best friend, and said, “Remember what we talked about, okay?”

Bobby and Gunny walked toward the street and the limousine that was waiting to take them to the Bronx, and the flume.

“How are you feeling, shorty?” Gunny asked. “I mean…where is your head you know, with things?”

“I feel like Saint Dane got the better of me on First Earth,” he answered thoughtfully. He then locked eyes with Gunny and said with total confidence, “And I’m not gonna let it happen again.”

“Shorty, you’re starting to sound just like your uncle Press.”

Bobby smiled. He liked that. The two got into the back of the big car, the driver gunned the engine, and they were on their way.

Mark and Courtney watched as the black limo picked up speed with Bobby’s hand still out the window, waving good-bye.

“What was it you guys talked about?” Courtney asked Mark.

“All sorts of things,” he said with a sly smile. “But I’ll tell you one thing: I’ll bet we’re going to see Bobby Pendragon again, a lot sooner than you think.”

They took a last look at the departing limousine and saw Bobby pull his arm back inside. The car turned onto the main road and disappeared.