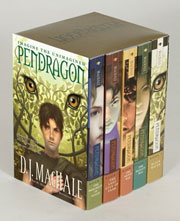 Bobby Pendragon was a seemingly normal fourteen-year-old boy. He had a family, a home, and even Marley, his beloved dog. Then one day his uncle Press showed up telling Bobby that some people needed his help, and nothing has been the same since.

Now Bobby knows that he is a Traveler, and it’s up to him to save the world. And not just Earth as we know it. All of Halla — every time and place that has ever existed — is being threatened by an evil enemy named Saint Dane, and Bobby must travel from one territory to another to stop Saint Dane’s terrifying plans.

Collected here together for the first time are books one through five in this exciting ten-book series!