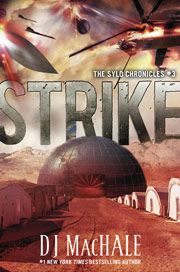 After his perilous trek across the United States, Tucker Pierce suddenly finds himself trapped behind enemy lines.

While on the run from SYLO, Tucker and his friends Tori and Kent are driven directly into the base of the destructive Retros.  The three become prisoners – part of a massive operation in which survivors are used to rebuild what has been destroyed by the SYLO-Retro war.  Day by day they toil as slaves while watching fellow prisoners being conditioned to forget any attachment they had to their old lives. Worst of all, they are forced to turn on one another in order to survive.

When the base is attacked, Tucker, Tori, and Kent have an opening to either escape or to investigate the mysterious dome at the center of the base that is left unguarded in the midst of the chaos.  What they discover will change everything they know about the war, their world, and themselves.

This epic, action-packed conclusion to The SYLO Chronicles is filled with twists, turns, and an ending too surprising to see coming.  All questions will be answered. All mysteries resolved. The end is near.

Sit back and brace for the boom.