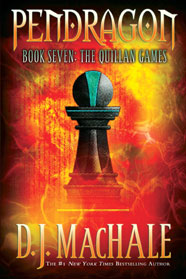 Quillan is a territory on the verge of destruction. The people have lost control of their own future and must struggle simply to survive. The only chance they have of finding a better life is by playing the Quillan Games. Hosted by a strange pair of game masters, Veego and LaBerge, the games are a mix of sport and combat. They use the people of Quillan as pawns for their amusement as they force them to enter competitions that range from physical battles, to impossible obstacle courses, to computer-driven tests of agility. To triumph in the games is to live the life of a king. To lose is to die.

This is the dangerous and deadly situation Bobby Pendragon finds on Quillan. He quickly realizes that the only way to save this troubled territory is to beat Veego and LaBerge at their own games and dismantle their horrible fun house. But there is more at stake for Bobby. The prize for winning the Quillan Games may be discovering the truth of what it really means a Traveler.

At the gate when Bobby first arrives on Quillanâ€¦ On the ground was a pile of clothing. Perfect. I climbed back inside and picked up the clothes that were left for me, or any other Traveler that paid a visit. I first picked up a long sleeved, bright red shirt. There were no buttons or zippers. No collar either. It was like a long-sleeved t-shirt, but the material was heavier and a little bit stretchy. The only design was a series of five black stripes that ran diagonally across the front from the left shoulder down to the right side of the waist. It reminded me a little bit of a rugby shirt. There was also a pair of pants. Simple, black, made from the same stretchy material. I was psyched when I saw the shoes. They were like my running shoes from Second Earth. They were black and didn’t look fancy, but they definitely looked comfortable. On my travels I had worn leather sandals and rotten rags and leather dress shoes and swim boots and pretty much anything else that was designed specifically to be uncomfortable. Here, I couldn’t wait to get them on. I quickly took off my Rokador clothes and slipped into the local attire. As always, I kept on my boxers. That’s where I drew the line. If the future of all humanity was going to be decided on whether or not I wore boxers from Second Earth, there was no hope of saving it. The clothes fit perfectly, as usual. Even the sneakers. For the first time in forever I actually liked wearing my clothes.

I then noticed there was something else on the floor. It looked like a silver bracelet. It was a thick, oval ring with a single groove etched deeply all the way around. It wasn’t fancy or anything. Nor did it look like it had any function. It was kind of clunky and felt heavier than it looked. But I figured if it was at the flume with the long with the paper that had the strange, rhyming invitation from Veego and LaBerge.

That’s when I heard the chattering again. Whatever was making the sound, this time there were more of them. Many more. The clicking and crunching sounds grew. I waited a second, expecting the sound to disappear again. It didn’t. Whatever it was, their numbers were growing. I slowly turned around, not knowing what to expect. What I saw shouldn’t have surprised me. I don’t know why I didn’t think of it right away, but I didn’t. Bad move. What I saw in the darkness on the far side of the flume were dozens of tiny little eyes, peering at me. That’s all I saw. The eyes. Yellow eyes.

My adrenaline spiked. A nano-second later I was in the air, head first, diving for the square doorway out of the gate. I sailed through the opening, hit the ground, rolled, then popped back up and turned to see if I was being followed. I stared at the closed door, waiting for something to come out. It didn’t. That’s because it was already out. I felt a little tickle on my shoulder. Before I could react, something bit me. Hard.

I threw myself against a tall crate, hoping to crush whatever had attacked me. I slammed my shoulder, but I didn’t care. I wanted whatever had chomped me to be gone. I heard a crunching sound, and a squeal. Throwing myself away from the crate, I looked down as the vicious little hitchhiker fell to the ground.

It was a spider. A big spider. No, a HUGE spider. It looked like a tarantula on steroids. The beastie had to be the size of a kitten, but there was nothing cute or cuddly about it. Its thick body and multiple legs were blood red; it had pincers in front that snapped like an angry lobster; and its head was so black that its yellow quig-eyes looked like they were glowing. I wasn’t sure if it had snagged me with one of its pincers, or bitten me with its mouth. Either way, I hoped it wasn’t poisonous or I would be done before I even got started on Quillan.

When I slammed the quig-spider into the wall I rattled it, but didn’t kill it. The thing was on its back with its legs scrambling in the air. I was about to go over and step on it, when it suddenly flipped back onto its feet, and looked at me. I swear guys, this little monster looked at me. It had intelligence. But as vicious as this little beastie looked, there was worse news. It wasn’t alone. I heard the scratching sound again and shot a look toward the door to the flume. What I saw made my stomach drop. The small door pushed open and out came hundreds, no thousands of the little quig-monsters. They cascaded out of the hatchway and down onto the floor like a living, evil waterfall. I could hear their sharp little claws clicking against the cement floor like nails. Sharp nails. Was I scared? What do you think? But as I watched those vicious little beasties stream out of the gate, I actually had a fleeting thought that snuck through the terror: I was in the right place. Saint Dane had brought quigs to the flume. This territory was hot. Things were going to happen. But it wasn’t more than a flash of a thought that was immediately replaced by another. These monsters were coming for me. It was time to be someplace else.