Home > The Books > Pendragon > The Pilgrims of Rayne

The Pilgrims of Rayne 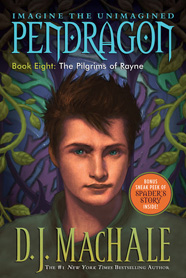 When Bobby Pendragon first arrives on the tropical world of Ibara, he finds paradise. As he works to uncover clues about the turning point this seemingly idyllic territory will soon face, all he can determine is that the people of Ibara are blissfully happy. It’s not long before Bobby discovers, however, that they are also blissfully…oblivious.

The leaders of Ibara are keeping a devastating secret from their people, one that gives Saint Dane all the opportunity he needs to launch his final assault on Halla.

While Bobby struggles to learn the truth in time to thwart Saint Dane, Courtney Chetwynde desperately searches for Mark Diamond. On the heels of a shocking tragedy, Mark has disappeared. Worse, he seems to be under Saint Dane’s influence. It’s up to Courtney to find Mark and stop him from making a grave mistake that could change the future of all existence.

The future isn’t what it used to be.

I know that makes no sense. What else is new? There isn’t a whole lot that has made sense since I left home three years ago to try and stop a shape-shifting demon who is bent on destroying all humanity. At least I think it was three years ago. It’s hard to tell when you’re out of your mind. And space. And time. My name is Bobby Pendragon. I’m a Traveler. The lead Traveler, in fact. The Travelers’ job is to stop this guy named Saint Dane from changing the natural destiny of the ten territories of Halla and plunging them into chaos.

Do I have your attention yet? Stick around. It gets worse.

The Travelers’ mission is to protect Halla. Halla is everything. The normal and the exceptional, the common and the impossible. Halla is all that ever was and all that will be. I know, sounds like a bad sci-fi movie. I’d think so too if I weren’t living it. Every day. When I left home I was an ordinary fourteen-year-old guy whose biggest worry was whether or not Courtney Chetwynde liked me…and if she’d notice the zit that erupted in the middle of my forehead like some third freakin’ eye. Now I’m seventeen and the leader of a group that must protect the well-being of eternity. The future is in my hands. The past is in my hands. There’s nobody else who can stop Saint Dane.

Kind of makes the whole zit-on-the-forehead thing seem kind of lame, doesn’t it?

Why Saint Dane calls himself “Saint” is a mystery to me. He is anything but. He isn’t even human. At first I thought he was pure evil, just for evil’s sake. But the more I learn about him, the more I realize there’s something else that drives him. It’s hard to explain because I don’t understand it myself, but I’ve come to think that for some twisted reason, Saint Dane believes what he’s doing is right. I know, how can a guy who is pushing societies toward cataclysmic disaster possibly believe what he’s doing could be justified? When I find that answer, I’ll unravel the entire mystery of what has happened to me. Why was I chosen to be a Traveler? What happened to my family? Where did Saint Dane come from? Why does he have these incredible shape-shifting powers? What did he mean when he said all the Travelers were illusions? (I’ve lost sleep over that one.) What is this all leading to?

Saint Dane talks about something called the “Convergence.” I have no idea what it is, and I’m not entirely sure I want to. But I have to. Is it something Saint Dane is creating or was it destined to happen anyway? No clue. The only thing I know is that it’s up to the Travelers to make sure whatever the Convergence is, it won’t come out the way Saint Dane wants it to. It’s the only way to be sure that Halla will continue to exist the way we know it. The way it was supposed to be.

I write these journals for two reasons. One is to document what has happened to me for the ages. You know, history and all that. A thousand — no, a million years from now I believe it will be important for people to know what happened. The other reason is to let my best friends from back home know what’s going on with me. Mark Dimond and Courtney Chetwynde are the only people from Second Earth who know the truth.

But things have changed. Mark is missing. Worse, I’m afraid he started a chain reaction that caused serious damage throughout Halla. The cultures of the territories are not supposed to be mixed. I’ve learned that the hard way more than once. Okay, a lot more than once. Territories have their own distinct destinies that must be played out. Mixing the territories creates havoc. Saint Dane likes havoc. He’s mixed the territories at every opportunity, and I believe he has gotten Mark to unwittingly help him do it again. At least I hope it’s been unwitting. The alternative is unthinkable. I wish I had never gotten my friend involved in all this by sending him my journals.

As for Courtney Chetwynde, she’s with me now. Together we’ve got to find Mark and try to undo the damage. Courtney and I have come a long way since we were childhood rivals. She is my acolyte and she is one of my best friends. Same as with Mark, I wish she weren’t involved in any of this. She’s been through hell. But we can’t look back. We’ve got to keep moving ahead, which in some ways means looking back. Don’t worry, that will make sense as you keep reading. I think.

With Mark missing and Courtney with me, I have no one to send these journals to. But I have to keep writing. For history’s sake, as well as my own. Yes, there’s a third reason why I write them. They help keep me sane. They allow me to look back and try to make sense of it all. The whole “making sense” part hasn’t worked so well, but the keeping me sane part is a good thing.

I don’t know who you are, reader, or how my journal ended up in your hands. I hope that you’ve already seen my earlier journals, because I’m not going to repeat everything that has happened. Those early journals, starting with #1 (duh), contain the whole story. If you haven’t seen them, go to the National Bank of Stony Brook in Stony Brook, Connecticut. Second Earth. My hometown. There’s a safe-deposit box there registered to Bobby Pendragon. That’s where my journals are kept. Find a way to get them and guard them with your life. They contain a story that, when complete, will tell of the events leading up to the destruction or the salvation of all that exists. Of Halla. It’s a real page-turner, if I do say so myself.

The future isn’t what it used to be.

This is where the next chapter in my adventure begins.