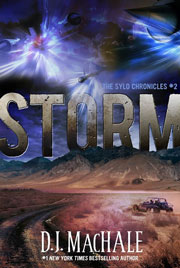 After a harrowing escape from the SYLO occupied Pemberwick Island, Tucker Pierce and his surviving friends have finally reached the mainland, only to find that no one is left.  The once bustling seaport city is deserted.

From the bowels of a Portland hospital where they encounter their first fellow survivor to the abandoned stores they must raid for supplies, Tucker, Tori, and company set off on a quest for answers and, for Tucker, vengeance. But as one highway gives way to the next — and one death-defying escape precedes another — Tucker soon realizes that “trust no one” doesn’t just mean the U.S. military.